As a rare disease community, we have the power to make lasting changes that make an impact and could help other families in the future.

My daughter, Joplyn, was born 8-weeks premature weighing only 2lbs 15oz. She was in the NICU for 92 days and was diagnosed with an ultra-rare disease at 2 months old.

Joplyn was diagnosed with Yuan-Harel-Lupski (YUHAL) syndrome is a rare neurological condition that combines the features of two other disorders, Potocki-Lupski syndrome and type 1A Charcot-Marie-Tooth Disease. There are fewer than 30 cases of YUHAL Syndrome ever documented in medical literature.

We were told to expect damage to occur to Joplyn’s peripheral nerves, leading to loss of sensation and wasting away of the muscles in her legs before the age of 5, as well as a degree of intellectual disability and global developmental delay. So far, she has also been diagnosed with spastic cerebral palsy, a brain malformation and silent aspiration causing her to be tube fed.

Joplyn is our first child, so her medical complexities were very new and scary to us, especially as first-time parents. It felt like a heavy burden receiving the diagnosis of such a rare disease and we felt very isolated because, as far as we know, Joplyn is the only one on earth with her exact chromosome duplication.

Aside from the mental stress, our lives are based around doctor appointments and therapy sessions. Doctors told us the worst-case scenario would be that our daughter never learns to walk, talk, or eat by mouth. Presently, at almost 18 months old, she is doing none of those things. She finally learned to sit unassisted at 16 months old.

Her frequent vomiting and feeding intolerance issues make it difficult for us to travel with her. It’s hard to find babysitters or ask family members to watch her because many are not comfortable with using her feeding tubes. She also receives 3 different medications 9 times a day. At this time, we are receiving many types of developmental services for her multiple delays, including PT, OT, VI Therapy, and Speech Therapy. She also wears ankle-foot orthotics to help correct her clubfoot.

I am a full time stay at home mom to take care of her until she is old enough to attend a special needs school. This impacts our family because I am not able to work and bring in some income. Her weekly specialist appointments are located an hour and a half from where we live, which is mentally and financially taxing.

At the Summit, I was able to connect with the CEO of the Charcot-Marie-Tooth Association who was speaking at one of the tracks I attended. She had never even heard of YUHAL Syndrome! We exchanged information and we’ve connected with their lead clinician for more information about YUHAL Syndrome and its association with Charcot-Marie-Tooth Disease.

At home, we have a large support group because my husband is a musician and is well known in our region. We also have support through social media as we started an Instagram and Facebook page called “Joplyn’s Journey.”

It is important for me to raise awareness about YUHAL Syndrome and other rare diseases because I feel it is an opportunity for me to help other families who may receive this diagnosis in the future. Just because Joplyn is the only one now doesn’t mean it will always be that way. I’d like us to be one of the pioneering families of YUHAL Syndrome and a resource for other families to reach out to in the future if they are looking for support.

Advice as a Rare Disease Mom

We were told by our geneticist that if they had found her chromosome duplication while I was pregnant, they would have recommended termination because there is not enough research about the disease and there would be “no quality of life.” I’m here to say that having my daughter is the biggest blessing of my entire life. Sure, it’s stressful and overwhelming at times, but I would honestly choose her and this life a million times over compared to the alternative of not having her. She is such a miracle and brings so much joy and happiness to our lives and the lives of other people who know her. You just meet her and fall in love. 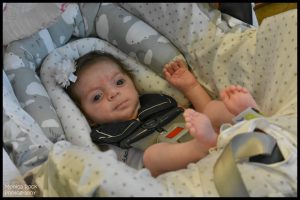 To other rare families, I would say that I know it seems hard and scary and impossible, but TRUST ME, it is worth it all. I couldn’t imagine my life without my daughter in it.

For more information, visit the Charcot-Marie-Tooth Disease Association and the Potocki-Lupski Foundation.