A Hopeful, Yet Uncertain Future

Worrying about the future is human nature. Taylor Kane shares what gives her hope.

Worrying about the future is human nature. While we all take steps to ensure that our future lives will be comfortable and happy, it’s almost impossible to stop our brains from questioning what lies ahead. We overanalyze and aggrandize our concerns, our worries, our mistakes. We ruminate about the “what ifs” — What if I fail the exam? What if I don’t get my dream job? What if I never find someone to marry?

I have found that young adults in the rare disease community tend to worry more than most others their age. It’s more difficult for us to push these worries aside and garner genuine excitement and hope for the road that lies ahead. It seems that there are more questions than answers and more battles to be fought. As we begin to ring in the spring and prepare for longer and warmer days, it’s important to remember the ever-increasing anxiety faced by young adults impacted by rare disease. 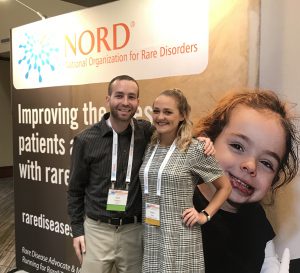 I feel that my carrier status is a part of me, and so is the associated isolation, worry, and fear about the future.

I’ve known I was a carrier of the rare, genetic disease x-linked adrenoleukodystrophy (ALD) for as long as I can remember. My family was told of my carrier status after my dad’s diagnosis with the disease in 2001 when I was three years old. Now, as a 21-year-old college graduate, I feel that my carrier status is a part of me, and so is the associated isolation, worry, and fear about the future.

Carriers of rare diseases have long been overlooked and understudied. In the case of x-linked disorders, for many years medical professionals believed that because females have an extra X chromosome (as compared to males who only have one) they would not be physically affected by a genetic defect on one of their X chromosomes. Today, science has demonstrated that due to a phenomenon known as x-inactivation, many x-linked carriers do eventually develop symptoms, though usually less severe and disabling than those experienced by their male counterparts. Despite this realization, there is little research regarding the precise nature and extent of carriers’ physical symptoms, not to mention treatments for those symptoms.

When I tell someone about my carrier status and the high likelihood that I will eventually develop symptoms, including neuropathy in my lower extremities (I have met a number of carriers in wheelchairs) and bladder/bowel dysfunction, he or she often asks me if I have any of these symptoms yet. I don’t know how to respond, however, because the truth is: I don’t know.

I often have horrible restless leg syndrome (RLS), for instance. I experience pain, tingling, and an uncontrollable urge to move my legs, which frequently keeps me from getting a good night’s sleep. Is this related to ALD? I don’t know, nor do my doctors. Many ALD carriers experience RLS, however, so do non-carriers. It frustrates me that there is no way to tell if my RLS is related to the fact that I am a carrier. From time to time, I also have other unusual physical symptoms that I believe are unusual for someone my age. While none are currently disabling or life-altering, the fear that someday they may be is always in the back of my mind. 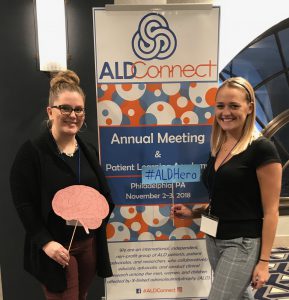 Another significant concern faced by carriers of genetic diseases is the potential that they may pass their condition to their future offspring. While there are methods of alternative reproduction that can ensure that these conditions do not pass to the next generation, these methods often remain extremely expensive and inaccessible to many who need them.

While being a young adult with a rare disease can clearly be anxiety-producing, it can also be enlightening and yes, even rewarding. Over the years, I’ve watched the rare disease community, including patients, caregivers, clinicians, industry members and more, grow into a powerful team of advocates and even more importantly, a family with an unbreakable bond. I’ve witnessed young adults using their voices to tell their stories and make a difference, with the support of the rest of the community lifting them up and cheering them on. If there’s one piece of advice I’d give to anyone in the rare disease community, both young and old, it would be that advocacy generates hope.

Taylor Kane is a 21-year-old carrier of the x-linked disease Adrenoleukodystrophy (ALD). Her father, Jack, was diagnosed with ALD when she was three-years-old, Jack’s condition quickly deteriorated, and he was completely bedridden for many months, unable to talk, walk and swallow, or understand much of what was going on around him. He died when she was five. Taylor became an advocate for ALD families at a very young age, helping to raise over $200,000 for ALD research. When she was in high school, she lobbied the senate and assembly in her home state of New Jersey, to introduce and pass a bill requiring the screening of newborns for ALD.  She subsequently testified before both houses in support of the bill, and petitioned the governor to sign the bill into law, which he did in 2013.

Taylor founded Remember the Girls after learning that more than 50% of female ALD carriers go on to develop physical symptoms–sometimes severe ones, and that many carriers of the other x-linked recessive disorders are similarly affected. She soon realized that these female carriers, as a group, are often overlooked by the medical community, omitted from clinical trials, and have little peer or other support. While Taylor fervently believes that it is vital to continue to search for treatments and cures for the males who are typically more severely affected by these genetic diseases, Taylor also believes it is important to REMEMBER THE GIRLS!