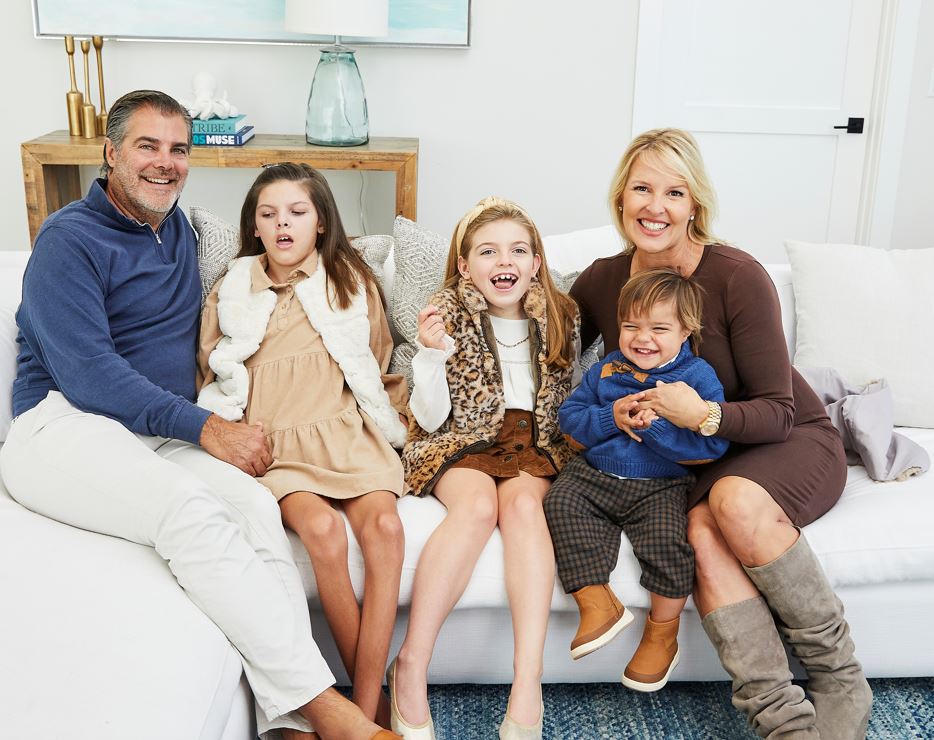 Crafting an Answer to Batten Disease

When their two daughters were diagnosed with a rare, neurodegenerative disease, the Grays created their own hope.

When our eldest daughter, Charlotte, went to preschool, she was just like any another 2.5 year old girl: talkative, loved to sing and dance, and enjoyed swimming, gymnastics and many other activities. But by the middle of her first year in preschool, I noticed her speech progression had plateaued and I became concerned enough that I spoke with her teacher about it. The teacher’s only recommendation at the end of the year was for Charlotte to work on her fine motor skills over the summer.

However, despite Speech and Occupational Therapy over the summer, I noticed there were things Charlotte could not do that her peers were doing with ease. Growing more concerned, my husband and I decided to see a pediatric neurologist, who initially suggested that Charlotte may be on the mild side of the autism spectrum. We didn’t feel comfortable with that diagnosis; we felt there was more going on and we kept pressing for answers. When we noticed a muscle tremor after she tripped on some packages on Christmas Eve, and additional tremors in early January, we knew we were right to keep searching. A few months later, after an EEG, an MRI and genetic testing, we received the diagnosis of Late Infantile-NCL, CLN6, a rare subtype of a group of diseases called Batten disease; a rare, genetic, neurodegenerative brain disease that leads to progressive vision deterioration, motor function delays and regression, and cognitive difficulties. At the time, there were no treatments or cures available for any subtype of Batten disease and children with the CLN6 subtype had a typical lifespan of only 6-12 years of age.

We finally had an answer, but it was a heartbreaking one. Even more heartbreaking when we were told there was a 1 in 4 chance that our younger daughter, Gwenyth, shared the same genetic mutations. A genetic test confirmed our worst fears – both daughters were diagnosed with the CLN6 subtype of Batten disease.

Creating Our Own Hope

We refused to accept the prognosis for both our daughters, and we decided we weren’t going down without a fight. We immediately founded and launched the Charlotte and Gwenyth Gray Foundation, scoured the country for researchers and specialists, and raised money to find treatments and a cure. We were able to attend the Batten Disease Support and Research Association’s annual family conference  and talked to specialists and researchers and got recommendations for who could help us find a treatment for our daughters, and others diagnosed with CLN6.

My husband and I were not scientists or philanthropists, so we had to work tirelessly to surround ourselves with the right specialists and advocates to find a way to make a difference for our daughters. Because Batten disease is rapidly progressive, we needed to speed up the development timeline in order to find a potential option before it was too late for Charlotte. We jumped into funding research in gene therapy, small molecule therapies, and regenerative medicine all at once, and we were lucky enough to piggyback off emerging gene therapies for other rare diseases, such as spinal muscular atrophy (SMA). We pushed the development of a gene therapy along as quickly as possible, with the hope that we could find an answer for our daughters.

Our initial efforts came to fruition just one year after Charlotte’s diagnosis – she was the first patient treated with a gene therapy for CLN6. We were grateful for the hope and encouraged by the science. Unfortunately, while one year for drug development is short, for Charlotte it was too long – she had already lost her ability to walk, talk, and feed herself. While we’ve seen the progression of the disease slow down since treatment, and we know it is effective, it won’t help her regain those abilities. For Gwenyth, we can see the impact of earlier treatment. Because she received the treatment earlier in the progression of the disease, she’s still able to eat, walk and do most things that a typical child her age can do. But there are still challenges, and we know that it isn’t a “magic bullet” to cure Batten disease. We’re still searching for complementary treatments, more options to help our daughters and other children like them. We’re still working on creating hope.

Goals for the Future

In the years since Charlotte and Gwenyth were diagnosed, we’ve raised millions of dollars and funded research a gene therapy trial and offered scholarships to families impacted by Batten Disease. We opened a school for local children with moderate to severe motor and intellectual disabilities, providing a place to educate children whose needs are too complex for public schools. But we have more goals for the future, including more therapies, scholarship funds to support families in and outside trials with therapeutic interventions, handicapped accessible bathrooms and equipment and even car seats. Additionally, we know there is a lot of work to be tackled on the legislative side to help support the rare disease community at large, as well as the Batten disease community. And, we’d love to do more to share our knowledge and the wisdom we’ve gained through experience for parents who want to know who to talk to, how to fundraise, how to create a foundation, how to hire a scientific board, and how to navigate the challenges and pitfalls of searching for answers in rare disease. We get emails from families every week sharing their stories and asking for information, knowledge, and hope.

While individual rare disease communities are small, we’re large and impactful as a collective. My biggest piece of advice for families facing a rare disease diagnosis is – if you want something different for your child, a different prognosis, you’re going to have to go get it yourself. It’s going to be hard, intimidating and daunting, but it will yield something for your child or another child. It may provide some key learning that will help develop an answer or lead to an opportunity down the road. And I am hopeful that in the future, we’ll be able to band together to find real solutions for children with Batten disease.

There are 13 subtypes of Batten disease, each caused by an anomaly or mutation on a different CNL gene, causing the body to create a non-functional CNL protein. This results in lysosomal dysfunction, causing accumulation of cell waste throughout the body. Symptoms of Batten disease vary widely both between subtypes and within each subtype, but common symptoms include seizures, vision impairment, motor function decline and dementia.