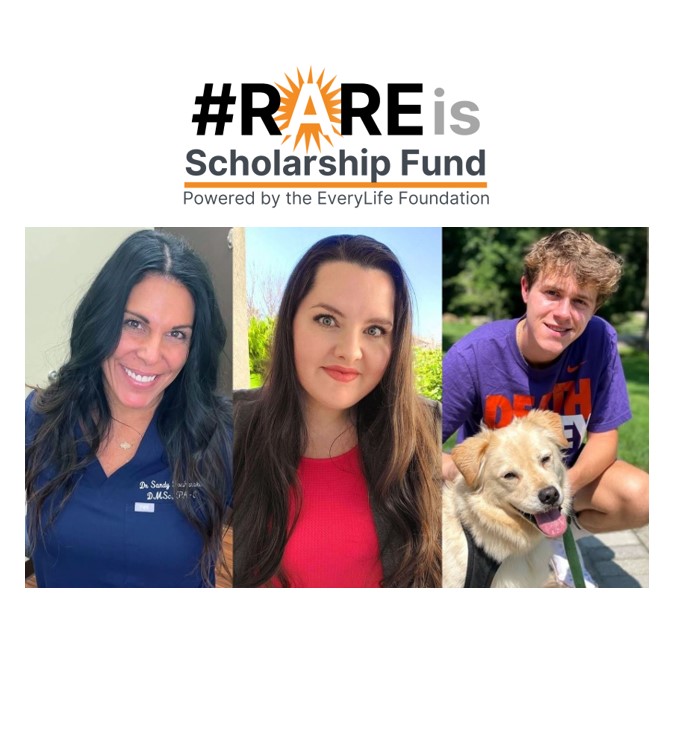 Sandy, Sara and Gino, recipients of last year’s #RAREis Scholarship powered by the EveryLife Foundation, share their stories of how the funding has helped them pursue their educational dreams.

Living with a rare disease can present unique challenges and can sometimes mean that you have to adapt your lifestyle to your condition. The frustration of not being able to achieve educational and occupational goals because of access issues shouldn’t have to be another hurdle. The value that researching, sharing and giving a voice to rare diseases is huge and there are no better advocates than those living with a rare disease themselves.

That’s why we partnered with the EveryLife Foundation for Rare Diseases to establish the #RAREis Scholarship Fund. The goal of the award is to enrich the lives of people living with rare diseases by providing support for their educational pursuits.

In this blog, three recipients of the 2021 scholarship, Sandy Foukarakis, Sara Moore and Gino Vitelli, share their rare disease journey and what the scholarship means to them. You can read and watch below!

Three years ago in December 2018, Sandy woke up to find she was numb from the waist down. She was diagnosed with not one but three rare diseases: Guillain-Barré syndrome, transverse myelitis and neuromyelitis optic spectrum disorder (NMOSD). Although her paralysis was temporary, she still has lingering symptoms, but is confident that she’s figured out the medicine to help her manage her conditions.

As a physician with ten years’ experience, Sandy worked in spine and sports medicine. It was during her illness and recovery that she became interested in finding the causes of rare neuroautoimmune diseases and how functional medicine can help.

Functional medicine looks at the root cause of disease rather than managing the symptoms of the existing disease. As she saw the benefits of this system of medicine, Sandy decided to open a nutrition practice, Revive, that focuses on boosting immunity. She was already versed in medical knowledge and patient experience but lacked business knowledge. So, Sandy intends to use her scholarship to fund an MBA to help her build a practice with a solid business foundation.

Sandy knows how powerful dietary and lifestyle changes can be in managing rare conditions. Getting her business off the ground means she can be a voice for others. She was able to express her concerns because she had the medical know-how, and now she wants to give others the ability to advocate for themselves. Hear more about the impact the scholarship has had on Sandy’s life by watching her video.

Although Sara suffered her first fracture at four years old, followed by a further 12 fractures, shortness of breath and pain in her feet and legs, her doctors were unable to form a proper diagnosis. She carried on, coping as best she could until she had her first daughter around the age of 30.

When Sara noticed one of her daughter’s losing teeth, among other symptoms, at the age of two years old, she knew something was wrong and took her for genetic testing. After genomic sequencing tests, doctors were able to diagnose her daughter with hypophosphatasia (HPP), a rare genetic bone disease, and the testing showed that she’d passed the condition on. Sara’s half-sister, father and grandfather also had HPP, although her other daughter does not.

Sara dove into a rabbit hole of research, and although she found this overwhelming at times, she found it helped her to hear other people’s stories and make contact with advocacy groups. It brought her reassurance and a sense of community that she’d lacked for so long.

Because of this, Sara was inspired to further her education and is currently studying for a Ph.D. in clinical psychology, focusing on the emotional impact of the rare disease community and mental health and wellness. In this video, Sara explains how winning the scholarship will help her continue her studies and speak with authority and understanding about the effects rare diseases have on mental health and well-being for every person living with a rare disease.

Gino was a regular 9-year-old boy, planning sleepovers with friends, deciding who to sit with at lunch and wondering what to wear to school, when he woke up one morning in September 2011 to find he had lost motor and cognitive ability. He was unable to add numbers together or tie his shoes. Feeling his world had shattered, no one seemed able to give him a diagnosis.

Gino was eventually diagnosed with Pediatric Autoimmune Neuropsychiatric Disorders Associated with Streptococcal Infections (PANDAS), which he’s now been living with for over a decade. Initial treatments didn’t work well, but infusions, expensive as they were, made a big difference. He and his mother started campaigning for insurance mandate to cover the cost of infusions for patients. In October 2020, Gino testified before the Massachusetts’ State House and in January 2021 the governor signed the bill into law.

Now Gino is doing well. He’s a freshman, majoring in electrical engineering with a minor in business administration and math. His dream is to work in biomedical engineering, and he hopes he can help make advancements in the medical field and continue to advocate for people like him.

Winning the scholarship has strengthened his chances of succeeding and making a real difference to people with rare diseases and, one day, finding a cure for PANDAS. Find out in this video why Gino believes that despite the adversity he has faced, he feels that contracting his rare disease has made him a better, stronger person.

Applying for a Scholarship

If you’re over 17 and live in the US and have been diagnosed by a physician as having any form of rare disease – you can apply! You must intend to enroll full-time or part-time in undergraduate or graduate study at an accredited college, university, or vocational-technical or trade school for the fall 2022 semester. You don’t need to be an undergraduate or already hold a degree.

Applications for Fall 2022 semester close on Friday, April 22. For more information and to apply, visit https://everylifefoundation.org/rare-scholarship/#toggle-id-2.