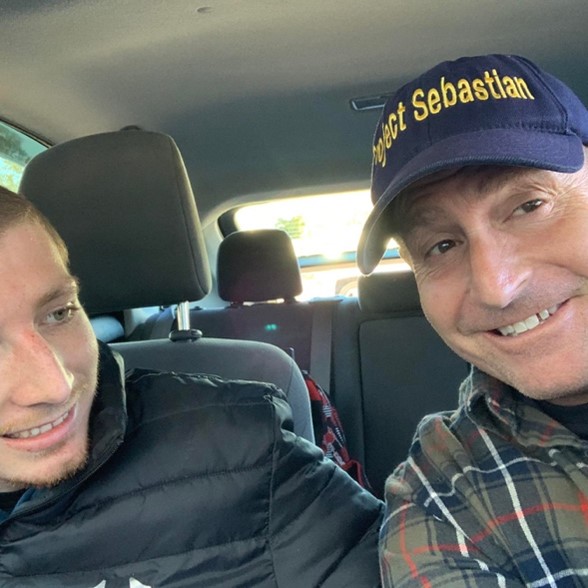 We Get You, We See You

When my son, Sebastian, was young, he experienced seizures and was initially diagnosed with epilepsy. But we pushed for more answers to explain his other symptoms as they developed, such as vision loss, cognitive delays and trouble walking and talking. Eventually, thorough genetic testing in 2011 led doctors to diagnose Sebastian with CLN8, a subtype of a group of diseases called Batten disease. CLN8 is a late infantile variant of Batten disease, which means that symptoms usually start later in childhood, typically between the ages of five and 10 years old, compared with other variants that may begin in infancy. Batten disease is a rare, genetic, neurodegenerative brain disease that leads to progressive vision deterioration, motor function delays and regression, and cognitive difficulties. At the time Sebastian was diagnosed, there was no cure and no approved treatments for any subtype of Batten disease.

As you can imagine, the diagnosis was devastating to our family, and we began searching all over the world for any answers or hope we could find. We created Project Sebastian, where we raised money to help fund any research that might help – natural history studies, clinical trials – anything to try to help our son. Unfortunately, our son’s genetic mutation is an ultra-rare form of a rare disease, and he kept getting older than many typical Batten disease patients, and the combination meant he was ineligible for many of the studies and trials we tried to enroll him in over the years. We would get our hopes up each time, only to be told no, yet again. It was an incredibly frustrating process and we still hadn’t found any answers for Sebastian.

Building the Support I Needed

Eventually, we had to try to make peace with the life we had; let go of the hope of finding a miracle for our son and look at ways to move forward. We may not be able to find a cure for Sebastian, but we needed to find a way to live the lives that we had. So, I looked around and realized what I needed most, in order to make that happen, was a support group. I wanted a way to talk to other families in the rare disease community and connect with people who may be able to help me work through my emotions, and I hoped to find a way I might be able to help other people. So, I created the support group I needed.

In 2021, Project Sebastian pivoted its focus from Batten disease research to creating a weekly support group meeting, available to any member of the rare disease community – patients, parents, siblings, caregivers, family members, doctors – everyone and anyone who wants a weekly check-in with other people who understand and keep it real. We meet in person in Valencia, Calif., on Tuesdays at 11:00 am PT, and we make the group available via Zoom as well, to reach even more members of the rare disease community. I created the group selfishly, because it was what I needed, but I am proud that we’re able to offer a community to help people in the rare disease community connect and offer support for the questions, emotions and uncertainty that are ever-present when walking in our shoes.

I feel like a lot of the progress that has been made in rare disease is due to parents and families who just haven’t listened when they were told, “no,” or “we can’t.” People who have fundraised to conduct science and create treatments; people who have advocated for their children and fought to raise awareness; parents who have created schools, and podcasts, and whole organizations to fight for our children.

We are still fighting for Sebastian – fighting with insurance companies to cover treatments that help, fighting to see if a repurposed drug may work to reduce symptoms or slow disease progression, fighting to ensure he has access to whatever therapies or support he needs to keep living the best life possible, given his diagnosis. And I feel more empowered having the strength of Project Sebastian behind me, to help us continue to find ways to help Sebastian and other members of the rare disease community.

There are 13 subtypes of Batten disease, each caused by an anomaly or mutation on a different CNL gene, causing the body to create a non-functional CNL protein. This results in lysosomal dysfunction, causing accumulation of cell waste throughout the body. Symptoms of Batten disease vary widely both between subtypes and within each subtype, but common symptoms include seizures, vision impairment, motor function decline and dementia.